Skip to content
Kiara with a quick update from this past weekend 4/23/2022
This weekend I showed at the Liberty and Freedom Jackpot in Ramona. Day one, I exhibited my ram lamb, Blake, and Bailey. I made it to senior final showmanship for both lamb and beef. I received Grand Champion Ram in the breeding sheep show. Second place with Blake and fourth place with Bailey.
Day 2, I exhibited Blake, Bailey, and Buddy. I made it into senior showmanship finals again. Bailey received first in her class and Grand Champion of the breeding beef show. Buddy and Blake both won their classes and Blake got fourth over all.

I am so excited, I won my first buckle with Bailey and look forward to the future and how they will do at upcoming fairs. 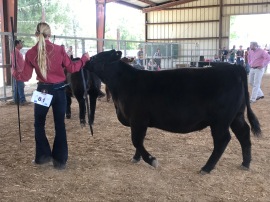 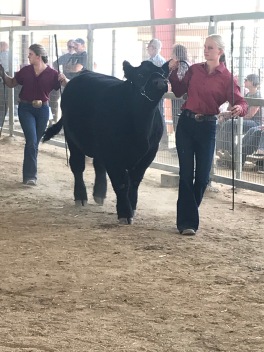 In the month of February, I exhibited Bryce and Bailey at the Red Wave Classic in Fresno California. Bryce received third place in his class. Bailey and I received fourth place in showmanship and second place in her class.

This year I exhibited at Western Bonanza for the very first time. Bailey received third place and Blake received fourth. I really enjoyed spending time with other kids from all over the state.  It was fun to meet new people that were also interested in showing cattle.

Over the last couple of months my steers have been increasing their consumption and gaining a lot. At the moment Blake weighs 1260 pounds and Bryce weighs 1040 pounds. I will be exhibiting Blake at the San Diego County Fair this coming June along with my other steer Buddy and a pig named Berry.  All of our market classes will be held on Wednesday June 22nd. Hopefully we will make it into the Grand Champion drive which will be held Thursday night. The Jr Livestock auction will be held on Saturday, June 25th. I am hoping that we will do very well. I am planning to exhibit Bryce at the Ramona Junior Fair in the end of July along with a lamb that I bred and a turkey.

Over the last month, I have been really working on grooming all of the dead hair out of all of my animals. As I realized that my pen space at home was too small to accommodate two steers, I reconfigured pens at the dairy to facilitate being able to house my steers under cover during the day and give them access to a larger area in the evenings to help with hair growth and quality. They are loving their new pen as it gives them much more space as well as better air circulation.

Next week I am planning on taking Blake, Buddy, and Bailey to a jackpot up in Ramona. It is the second time that they will be hosting the Liberty and Freedom Jackpot.  I plan to take one steer each day along with my heifer.  Bryce is going to get the weekend off as he has finally started putting on weight and I don’t want to throw him off by moving him.

Please let me know if you would like to come down and visit to see the calves.  I really appreciate it that you have taken the time to come watch and support me at shows this past spring.

Kiara, Blake, Bryce, and Bailey December, January Update
The past two months have been busy with caring for my heifer from the Colburn Family and working with my scholarship steer as well as my other market animals. At the beginning of December, I got another steer and so I have been extremely busy tying up my calves each day, rinsing, and working on halter breaking as they were not all halter broken. As my sister was home from college, we worked together as one of the calves likes to pull away. Fortunately he has never gone far, but it is definitely something that we need to break the habit.
I have gotten to take my animals to two shows so far. On December 11th and 12th, I attended the Holiday Classic in Bakersfield. I exhibited my heifer and she received second on the first day and 1st on the second day of the show. In January, my sister and I took my calves to the Sierra Winter Classic in Porterville. Bryce received 3rd and 4th and Blake received 4th and 4th. We were surprised that Pat and some of the donors came up to watch us compete. We were in really tough classes but I feel very proud of how the calves did. Blake is really green and so I am going to take him home and work on getting him to eat more feed and hopefully gain a lot of weight.
Currently my steers are on a combination of Beast, Pre Con, Alfalfa TMR, and free choice oat hay. The heifer is on Nutrena, however we are transitioning her onto Purina Show Chow as she seems to like it better, in addition, she is also eating Pre Con, TMR, and free choice oat hay. In the couple months that I have had my animal, the heifer, Bailey, has grown from 500 to 700lbs and Blake, all black, has gone from 800 to 960lbs. I wasn’t able to get Bryce, white sox, to the scale until about a month ago as he was still being a bit of a challenge on leading, however he has gone from 780 to 820lbs.
We are looking forward to this coming month where I hope to exhibit at Red Wave and Western Bonanza. 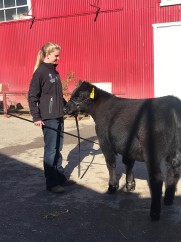 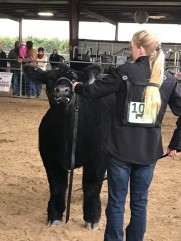 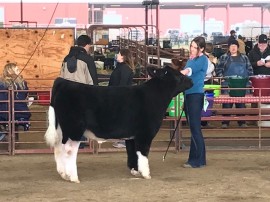 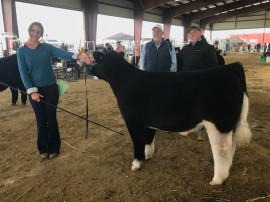 Kiara and (no names yet) November Update:

Hello, my name is Kiara Konyn and I am a freshman at Classical Academy High School in Escondido, CA. I am a member of the 56 Ranchers 4-H club and this is my 9th year in 4-H. This year I was honored to receive the scholarship heifer and steer from Curren’s Cow Foundation. In the month of November, I went to Kirk Stierwalt Clipping Clinic and picked up my scholarship steer and heifer. At the Kirk Stierwalt Clipping Clinic, I learned how to clip, facts about nutrition, fitting, and what different products are used for. My steer actually got to be used for the clipping demonstration. On November 21st, I went up to Colburn Cattle Company to pick up my scholarship heifer. Also on that same day I picked up my scholarship steer. At the moment I don’t have names, but will have names by next month. Thank you to Curren’s Cow Foundation for selecting me to be their scholarship recipient and for all they have done. 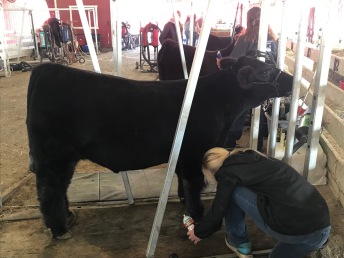 An update and shout out:
Kiara took possession of her heifer on Sunday, a cute little Angus Heifer that we are sure will grow into a beautiful cow. She took possession of a steer as well, and the steer will be used as a fund raiser for Curren’s Cows.
We want to thank Ron and Lisa Colburn and Tim and Heidi McBride. Ron and Lisa of Colburn Cattle Company donated the heifer as they have from the start. Tim and Heidi, sponsored the steer yet again. Tim, Heidi, Ron and Lisa have been supporting Curren’s Cows from beginning. We also want to thank, Blaine Rogers of Rogers Livestock for helping us with the acquisition of the steer, he found us a nice one.
Kiara will be very busy but we know she will do a great job.
Hopefully we will get pictures when Kiara submits her monthly update. We look forward to seeing both, the animals and Kiara’s progress this year.
Happy Thanksgiving and thank you to everyone who has supported Curren’s Cows, we appreciate you all.
The 2021-2022 Curren’s Cows Scholarship recipient is Kiara Konyn:

Kiara lives in Escondido, has shown just about every animal you can at both the San Diego County and Ramona Fair, she will be a great ambassador for the Curren’s Cows Foundation.

Hello, my name is Kiara Konyn. I am a member of the 56 Ranchers 4-H beef project and this is my sixth year completing the beef project. I would be honored to be given the opportunity to raise and show a heifer for numerous reasons. I enjoy participating at both local and jackpot shows with quality animals. I also enjoy practicing and would like to increase both my showmanship and fitting skills. I would love to have the opportunity to exhibit a competitive animal and be mentored by someone who my sister spoke so highly of the experience that she had with the program. I would also like the opportunity to improve my fitting and showmanship skills through workshops and clinics such as the Kirk Steirwalt Clinic and other livestock camps throughout California. Also to be able to show beef competitively throughout the state as I have done with my dairy heifers.

Although I still have a long time to go prior to starting college I think that would like to attend Cal Poly San Luis Obispo, Fresno State, or Oklahoma State University majoring in Animal Science. Through the rest of my 4-H years and into college I would like to participate on judging teams.

I am a very hardworking, dedicated person. I currently have limited funds. As I pay all of my own project related expenses, I can’t afford to purchase a high quality, competitive animal and be able to jackpot and exhibit the animal at numerous fairs. I hope that you will please consider my application for the Curren’s Cow Scholarship and give me this opportunity to raise a high quality heifer for competition. 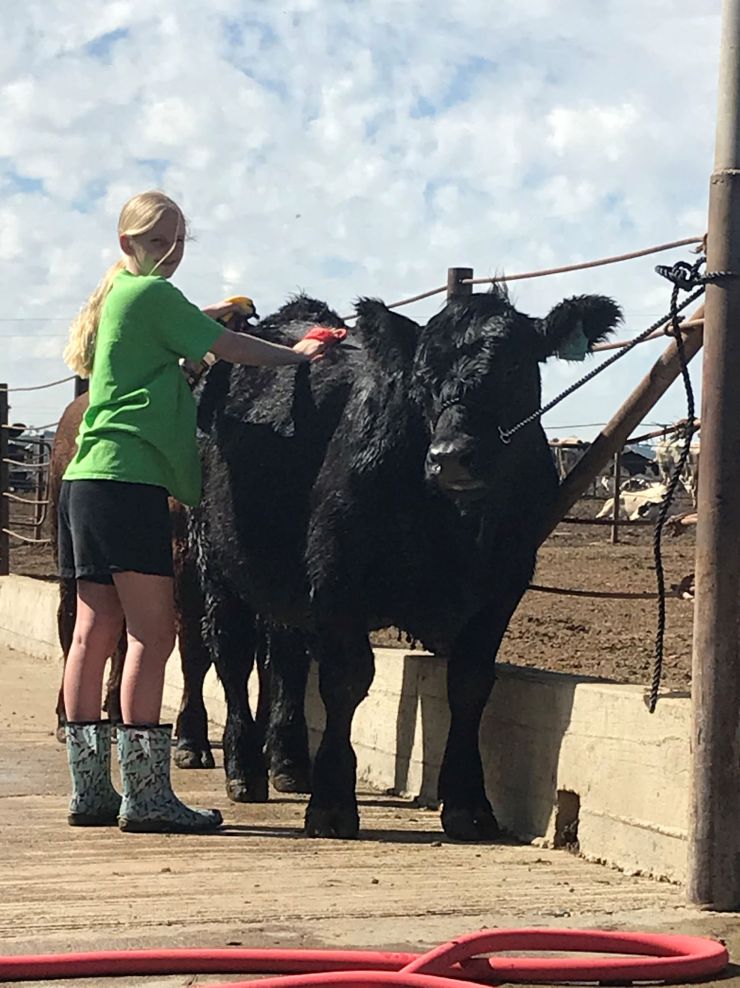